This is a follow-up blog post to Static Site Generators & the IndieWeb, brought about because of two excellent talks at Swansea Software Development Meetup by Lewis Denham-Parry and Salman Iqbal both of Cloud Native Wales. Salman talked about GitOps and Lewis gave an overview of the Cloud Native roadmap.

I want to build a service that enables easy social connectivity for people who want to Publish (on your) Own Site, Syndicate Elsewhere. Currently, I have signed up to the free tiers on Hootsuite for Facebook & WordPress.com, and on dlvr.it for Twitter, Google+ & LinkedIn. That‘s a lot of signing up.

Far better to have a workflow like the hosted blogging platform WordPress.com, where connecting your social network is a matter of clicking a button and granting permission: 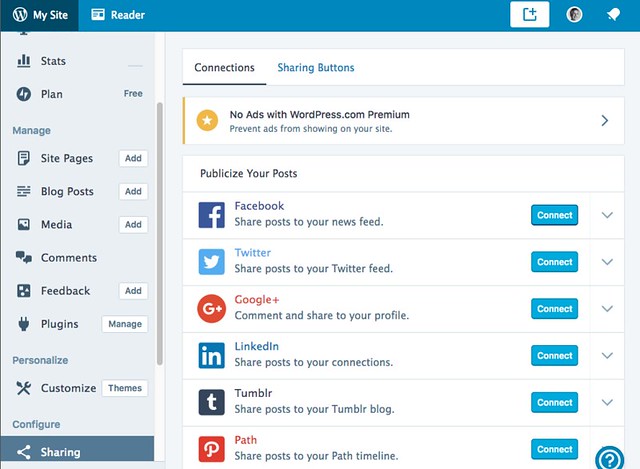 Ideally, this is a service that a PaaS like Netlify could offer. But in the meantime, I would like to build my own Cloud Native App with pointers from the able and far more knowledgable Salman and Lewis! This is as much an opportunity to learn about cloud native and create a proof-of-concept, as well as to hopefully build a useful service for those interested in IndieWeb independent publishing.

In the first instance, I’ll concentrate on the big three: Facebook, Twitter and Google+. My guess it will involve a lot of OAuth and a lot of form-filling. Will post updates here on this blog 🙂